Art in times of war

A painting cannot stop a bullet, but it can stop the shooting hand

Ukraine lives in a full-scare war for a second month. It is the second month of Russian massive invasion and the second month of total destruction. Russian actions cannot be called other that the terror and genocide in Ukraine – its people, its territories, its integrity and… its culture.

Losses on the art front

Russian army is attacking from north, east and south of Ukraine and it seems that there is no place safe.

UNESCO has already reported that 29 religious sites, 16 historic buildings four museums and four monuments (overall 53 objects) are confirmed to have been damaged in Ukraine. The list does not include information from the besieged city of Mariupol or the city of Kherson which was captured by Russia.

The Ukrainian Cultural Fund (UCF) created the map of culture losses. According to the UCF`s preliminary estimates, as of April 1, 2022, more than 150 different monuments and cultural objects were partially damaged or completely destroyed as a result of a full-scale Russian military invasion.

Invading Russian forces have burned down the Museum of Local History in the Ukrainian town of Ivankiv — located northwest of the capital city Kyiv. According to Ministry of Foreign Affairs of Ukraine as a result of the barbaric attack in small Ukrainian museum 25 paintings of the one of the most notable Ukrainian painters Maria Prymachenko were destroyed.

Art of Maria Prymachenko can seem at first sight as decorative and so called “naive” folkloristic art. But there are a lot of hidden disturbing sense in the painter`s art as the war deeply and directly affected Prymachenko’s life. A number of her paintings called out for peace and were affected by deeply tragic paged of Ukrainian history - World War II and Stalin`s regime.

Some of the journalists and local citizens of Ivankiv informed that they rescued Prymachenko’s paintings. This information has not been officially confirmed yet. There is still hope that part of Ukrainian cultural heritage once described by Picasso as “the artistic miracle of this brilliant Ukrainian” is not lost forever. 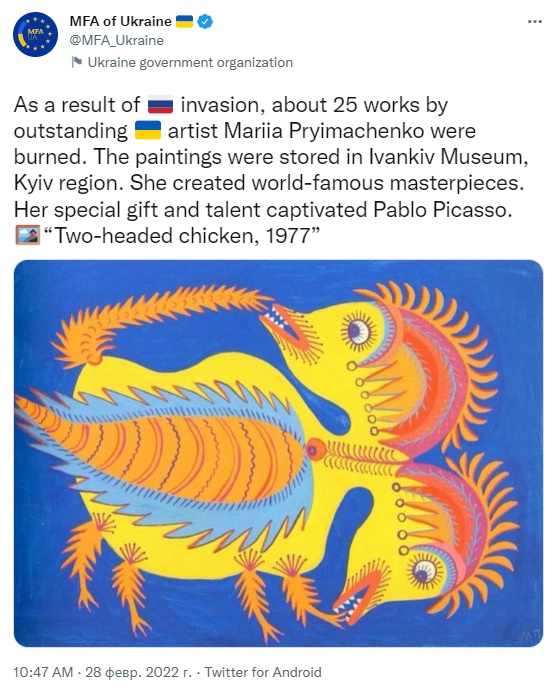 In Chernihiv Russian missiles destroyed the Vasyl Tarnovskyi Museum, a fin-de-siècle architectural monument. The fate of the museum`s collection is yet unknown.

Kharkiv Fine Arts Museum suffered substantial damage after the bombing nearby. The Museum`s staff struggled to secure exceptionally diverse collection of international and Ukrainian Art. Since all windows and doors were shattered, the museum's 25,000 works are now vulnerable to humidity and cold temperatures.

Among pieces of art in Kharkiv Fine Arts Museum there are 11 canvases by Ilya Repin, a 19th-century Realist who was born nearby but made his name in St Petersburg. "It's an irony of fate that we should be saving Russian artists, paintings by Russian artists from their own nation, it's just barbaric," said Maryna Filatova, administrator at the Kharkiv Art Museum.

Across Ukraine all members of the art community are preventing the damage which could be made to sculptures, paintings and historical sights. In Odessa volunteers stack hundreds of sandbags around a monument to the Duke of Richelieu, a Frenchman who was one of the cosmopolitan port city’s founders.

The art community also created several storage bunkers at undisclosed locations and has had requests for evacuation support from galleries in Kyiv, Odesa and other Ukrainian cities. More than 20 collections were placed in shelters within the first 10 days of the invasion.

Urban architecture remains one of the most affected parts of Ukrainian art in wartime. Apart from taking and affecting human lives bombings physically destroy cultural monuments. For instance, in the city of Kharkiv, where the Docomomo Conservation Group counts up to 30 heritage sites to have already been targeted by the Russian army. Among them are an opera house and a concert hall — landmarks of Ukrainian architectural heritage.

Ukraine’s art workers are united in special front to protect the country’s cultural heritage. They’ve snatched artworks from fires and driven for days with installation pieces in the trunk.

Ukrainians are incredible. They find instant solutions to any problem. My team and me work nonstop despite personal hardships, communication challenges and Internet access issues. We support both the army and the domestic front by delivering medication and necessary equipment by car. We receive countless letters with requests for help and thank-you notes from our clients and various institutions.

Art community in Ukraine understands its influence and power. World of art clearly made a choice to speak up and help in any way possible. Eventually, our army has weapons and tactical tasks, and the art front has its own objectives and methods.

“Ukrainians are incredible. They find instant solutions to any problem. My team and me work nonstop despite personal hardships, communication challenges and Internet access issues. We support both the army and the domestic front by delivering medication and necessary equipment by car. We receive countless letters with requests for help and thank-you notes from our clients and various institutions.” - Igor Abramovych, the founder of Abramovych Art Agency. His parents came under shelling when trying to reach a safer place by car.

For the first time in Ukraine, the community of NFT artists together with the Ministry of Digital Transformation have combined blockchain technology, art and historical facts. The world's first NFT war museum “Meta history museum of war” raised more than $ 600,000 to support Ukraine. The museum raised this amount on the first day of selling virtual exhibits. In total, 1282 digital works of art were purchased. The funds raised will go to a cryptocurrency fund set up by the Ukrainian cryptocurrency exchange KUNA to support the Ukrainian army and digital and cyber resistance.

“Meta history museum of war” is unique project which combines blockchain technology and contemporary art to document the historical truth about Russia's war against Ukraine. 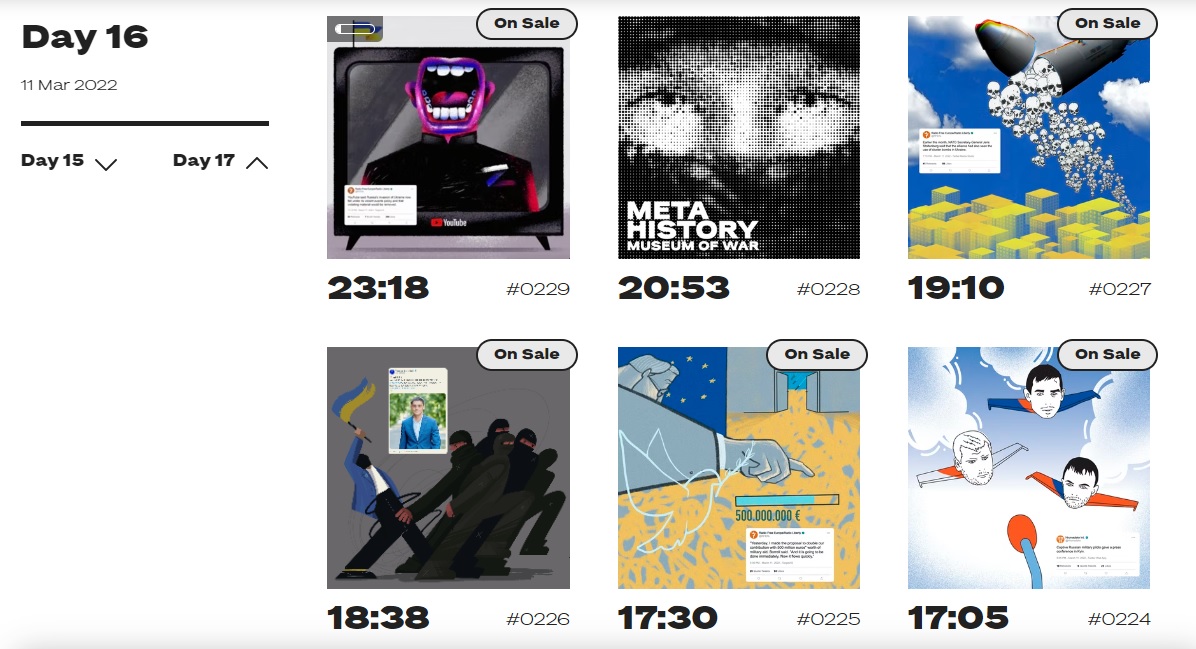 Day by day, the number of new NFT and fine arts project grows. All of them are aimed to help Ukrainian army and citizens. One of such projects is called “Teens save Ukraine”. All the paintings presented in the collection are created by Ukrainian teenagers, who unfortunately already know well what the war looks like. Every piece of art made by Ukrainian children is heartbreaking. 100% of the raised money will go to the needs of the Armed Forces of Ukraine. 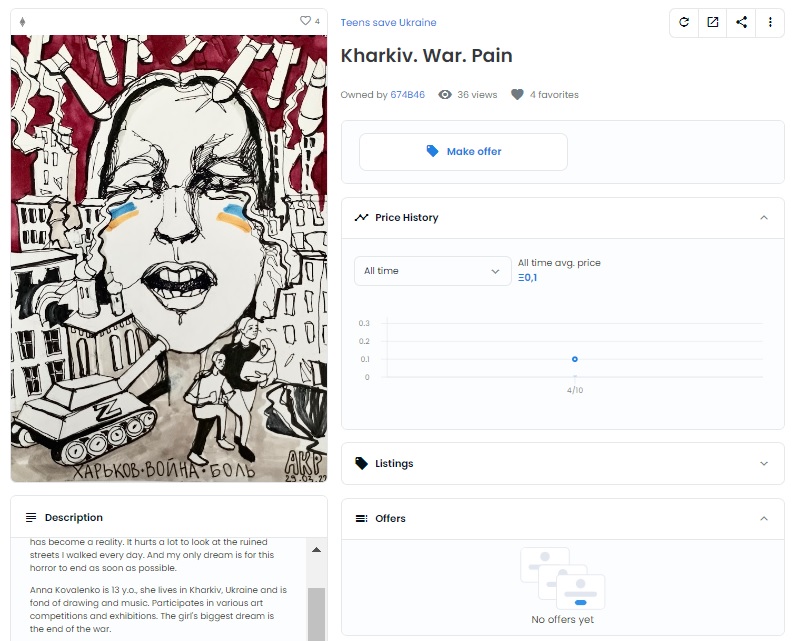 Another similar NFT project “Art Spoken In Ukrainian” – collection of contemporary art made by Ukrainian artists who are currently facing war. The description of the project says: “We do not know when the war in our country will end. But we do know that despite all the damages, all the hurt, all the pain we will rise back, building back even stronger than we were before”. I believe this statement sums up the position of Ukrainian culture on the current situation.

According to Viktoria Kulikova, Abramovych Art Agency’s art director at present, they are looking for opportunities to evacuate at least some of our works to Europe to preserve these great artworks, the nation’s cultural heritage. Ever since the war began, friends and partners of the Agency have offered comprehensive support and even launched new initiatives. Burlington Sculpture Park (MA) and Niwot Sculpture Park (CO) have organized special events to raise funds for the Ukrainian army and sculpture sales to support Ukrainian artists.

“Our esteemed colleague David Handley, the Sculpture by the Sea Founding CEO & Artistic Director, has spared no effort to help Ukrainians. He has been working with the UNHCR to support the 3 million of Ukrainian refugees” - told us Viktoria.

Apart from fundraising, sheltering and evacuating art objects there is still a load of work Ukrainian and world communities can do.

War does not come alone and does not choose what to aim for. The war is ruthless and all-consuming. We can remind ourselves from time to time what we have lost and remind others that this war is a war against the whole civilized world, free thought, democratic values, and truth.

The world has to know the truth – people all over the world should mention this invasion at art and literature events they attend or participate in. Support peace and drive the attention of your fellow citizens, media, and politicians.

Culture cannot be apolitical. It is part of our identity. Ukrainian identity, European identity, and identity of the civilized world. The only righteous decision we can do to support this identity is to stop any cultural cooperation with Russia. Only by promoting common values we can support peace.

Art is a language of emotions. That is why war inevitably becomes the driving force of art and promotes the creation of new works of art. Ukraine is entering the new cultural dimension of war. Ukrainians use music and illustrations to depict the realities of Russia's invasion. Reliving these events through art will help Ukrainians to live through what we saw, our losses and move on with pain and memories in our hearts.